skip to main | skip to sidebar

There is this critter, a salamander, that lives in cold water in deep caves in the Dinaric alps. It’s called the olm, which is fun to say, and it lives its whole life underwater in the dark. It eats sparingly, sometimes going for a decade between meals, and it spends a lot of its time just relaxing. It’s very good at swimming but that’s not what it mostly does. It mostly rests, as I said. I like to think it has a rich inner life, that sober contemplation on being a blind pale aquatic amphibian is all the olm needs.
Posted by Dave Maleckar at 4:49 AM No comments:

The author and critic Damon Knight generally gets credit for introducing the term “idiot plot” to describe a story that can only be sustained because the protagonists are idiots. If they weren’t, the story would be over. Like Superman, where, if you think about it, the moment Clark took off his glasses to clean them the whole secret identity thing would collapse although I myself wear glasses and so far when I remove them nobody has ever said, “Who are you and where did Dave go?” So here’s the challenge: Try to construct a non-idiot plot explanation for human history.
Posted by Dave Maleckar at 6:03 AM 2 comments:

spores are yellow-brown and distinctly warted.

Commonly known as the tapioca slime mold, the species Brefeldia maxima is a nonparasitic Amoebozoan that looks, as you may have intuited from its name, like a slimy layer of white goo. It goes through a lot of interesting life phases, as do we all, but I want to highlight what they call the plasmodial phase, during which the whole damn thing is a single cell which can be like a yard across and weigh up to 40 pounds – a pale, brainless, soggy mass. They are most commonly found in forests after a rain, and in the United States Senate.
Posted by Dave Maleckar at 7:42 AM 2 comments:

Should I be upset that more people take off the day after Super Bowl than do Martin Luther King Jr. Day? Should I bother mentioning that by simply moving a space we can have a Sunday devoted to the Superb Owl? Or that adding a space can turn a well-known chicken franchise into Pope Yes? But that’s not what I want to discuss. I want to point out that although there’s a lot of loose talk about how terrible it is to be led by a stupid person there is little historical evidence indicating that smart people do any better.
Posted by Dave Maleckar at 8:40 AM No comments:

Never ate the silica gel, though.

It was years ago when I first stepped over that bright line, and then there was no going back. I removed tag (under penalty of law), and began a life of unapologetic transgression. Before long I was leaping before I looked, putting all my eggs in one basket and then counting the chickens before they hatched. I went looking for trouble, made mountains out of molehills, put the cart before the horse. Once I judged somebody before I’d walked a mile in their shoes. And lately, I have been attributing to malice that which can be adequately explained by stupidity.
Posted by Dave Maleckar at 7:22 AM No comments:

The low-down on the load-out.

When I’m not writing the bestest little blog in the whole wide world, sometimes I am a bass player, generally defined as “someone who likes to hang around with musicians.” And I’ve made what I believe to be an important observation. People may be willing to accept and even embrace those with different skin tones, cultural heritages, political views, food preferences, hair styles, or intoxicant capacities. They can even coexist in harmony with those whose spiritual practices diverge broadly from their own. But everybody believes, deeply, that they know the one and only correct way to wrap a microphone cable.
Posted by Dave Maleckar at 4:53 AM No comments:

Nostradamus quit college when they closed the university due to the plague. Then his wife and their children died of the plague. So he invented a pill to cure the plague, which didn’t work but then neither did anything else. Later he wrote 942 four-line poems which prophesied our current world with astonishing accuracy. Here’s one:

“The sister's brother through the quarrel and deceit
Will come to mix dew in the mineral:
On the cake given to the slow old woman,
She dies tasting it she will be simple and rustic.”

Let’s see their so-called Science try to explain that!
Posted by Dave Maleckar at 4:51 AM No comments: 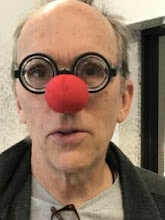 Dave Maleckar
New Orleans
I know you have your choice of blogs; thank you for choosing 100 word rant. I believe that any idea that needs more than 100 words isn't worth expressing in the first place. So I've dedicated myself to these rants: One hundred words, no more, no less, each and every week. I want to reach out, share some of my insights and, yes, a little of the wisdom I've picked up in my journey through this funny thing we call life. Plus, I don't get paid for this, and even a hundred free words is more than I can afford.